I’m currently deep in research for this project :) Now that I’m playing this game I’m looking at it with fresh eyes with thoughts of how it was implemented. It’s truly a clever game and the interaction is very well written. It’s clear as I play the game that a lot of thought went into the responses that are given to the player which is what makes the game so memorable.

The navigation is also quite involved, as illustrated in this partial map of the game: 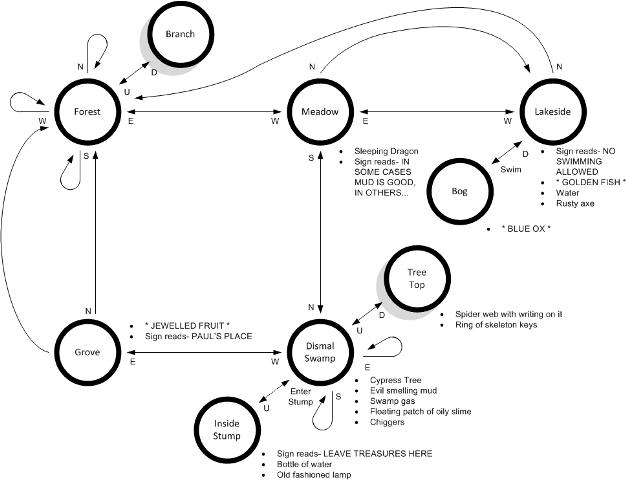 As you can see from the illustration, navigation may not always be logical such that moving in some directions leads back to the existing location, or in some cases to a location which is not logically adjacent. Navigation may also involve using a command such as “enter”, as in “enter stump”, which is a non-obvious exit. The commands accepted by the program are typically of the form {verb} {noun} as in “go north”. This can also be abbreviated as simply “north” or just “n”. The program also accepts multiple ways of expressing the same command, for example:

You’re in the top of a tall cypress tree.

You can also see: spider web with writing on it - ring of skeleton keys

Another interesting observation is that commands can change the attributes of objects in the game, or change the navigation options available to the user, as shown in the following example:

You’re on the shore of a lake.

You’re in a dismal swamp.

You’re in a dismal swamp.

Note that originally the available exits from the dismal swamp were north, south, east, west and up, but after felling the tree up has been removed as an exit. Also note that the description of the cypress tree object has changed, it now reads hollow stump and remains of a felled tree.

The descriptions and navigation in this game are obviously not static and therefore some method of changing these values based upon evaluating conditions is required. In my next post I will begin the analysis and requirements gathering for a game engine that can be used to create a text adventure game similar to Adventureland. I’ll use the behavior of the original game as a guide when determining requirements for this system.