It’s getting to be that time of the year again. Soon I’ll have to break out the shovel, but before then, I thought I’d put together a short tutorial on how to draw a snowflake using JavaScript and the HTML canvas element. 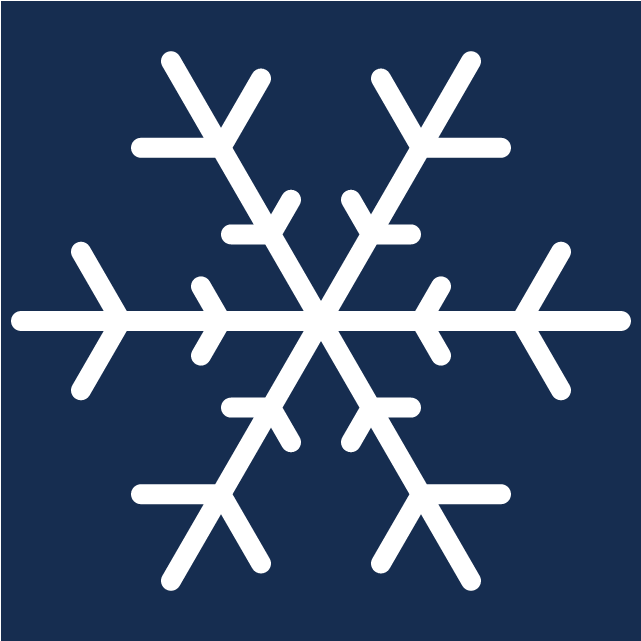 If you’d like to try this out on your own, here’s what you’ll need:

To get started, we’ll create a basic HTML document with a canvas element, script tag and a simple draw function. Open your text editor program and type in, or copy and paste, the following:

Now save this as an HTML document, for example, snowflake.html. Make sure that the extension is .html and not .txt. After you save the file, you could open it in a browser, but unfortunately you won’t see much at this point. This will be the framework around which we’ll build the rest of our snowflake drawing program. 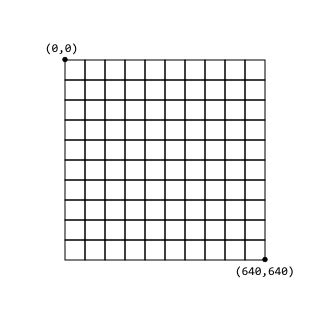 What do we know about a snowflake? They’re ice crystals that form with six, generally symmetric, arms. To draw our snowflake we’ll have six evenly distributed lines radiating from the center of our drawing. Imagine that our snowflake sits within a circle, each arm extends from the center of the circle to the outer edge of the circle. Since a circle is 360°, or 2π radians, the angle between each arm is 60°, or π/3 radians, as illustrated below: 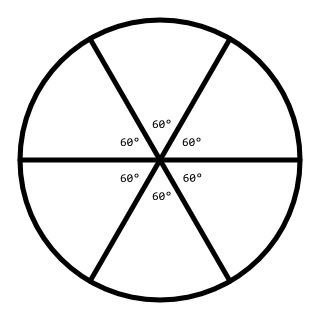 To make things easier for us, the 2D context object provides the translate method which shifts the 2D context to a new position. The advantage of this is that we can locate the origin wherever we want to by using translate, rather than calculating the offset from the upper left corner of the drawing surface. In our case it would be really helpful to relocate the origin to the center of the drawing surface. We can do this by calling the translate function with the new x and y coordinates for the origin. Since our canvas is 640 pixels wide and 640 pixels high, the midpoint is (320,320), which is where we want our new origin, as shown in the illustration below: 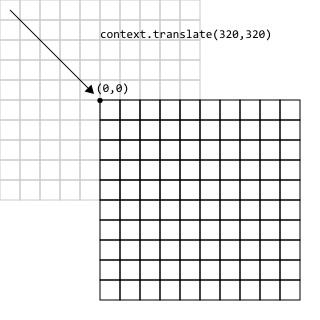 Now, we were easily able to determine what the midpoint should be because we’d specifically defined our canvas with dimensions of 640px x 640px, but what if we decide to change those dimensions in the future? Wouldn’t it be easier to have our program calculate the midpoint for us? Since we’ve obtained a reference to the canvas element using the function getElementByID, we can get the width and height properties of the element and store those in variables named width and height. We can then calculate the midpoint where we would like to translate the 2D context to as width/2 and height/2:

Painting a Path with Brush Strokes

There are two steps to drawing a line, first we must define a path, then we can make it visible by applying a brush stroke. To accomplish this, we’ll use the context methods beginPath, moveTo, lineTo and stroke to draw our line.

When starting a new path, we must call the method beginPath first. The function moveTo establishes where our path will start from, in our case we want to start from the origin (0,0), so we call the moveTo method with those coordinates. Next, we’ll call lineTo with the coordinates of the point to which we want to draw a line (300,0). Finally, we can apply a brush stroke to the path to make it visible by calling stroke. 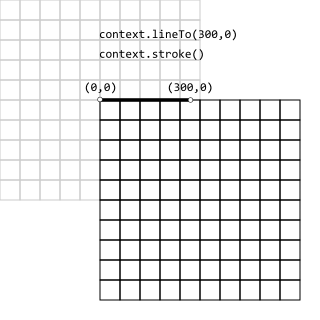 When we put it all together, our draw function now looks like:

Edit the draw function as shown above and then save your snowflake.html file. If you open the document in a browser now, you should see the line that we just drew: 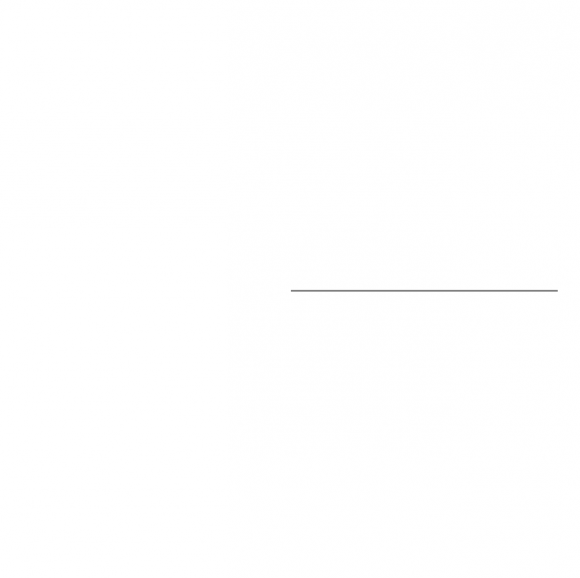 That doesn’t look like much, does it? We can dress this up a little bit by changing the background color, the color and width of the line and the line end cap style.

Colors are defined in terms of red, green and blue components. The minimum value that can be assigned to a color component is 0, the maximum is 255 or FF in hexadecimal (base-16). When specifying a color using hexadecimal notation, the value is prefixed with the # character. To get bright red, the red component is set to to its maximum value (FF), while the green and blue components are set to their minimum values (00), giving us “#FF0000”, likewise bright green is “#00FF00” and bright blue is “#0000FF”. To get pure white, all three components are set to their maximum values, “#FFFFFF”, while to get black, they are all set to their minimum values, “#000000”.

For this project, I chose a dark blue which includes red and green components as well as blue “#162D50”. For the brush stroke color for the line, I chose white “#FFFFFF”. You can experiment with changing these values to get colors that you like, or you can choose a color using a color picker tool.

The context property strokeStyle can be used to set the color of the brush that we use to paint the path with. Likewise, the context property fillStyle can be used to set the color that we use to fill in a shape with. We’ll use this property with the method fillRect to set the background color of our canvas. The property lineWidth sets the width of the brush in pixels, and lineCap sets the style of the end caps for the line. The lineCap can be set to “butt”, “round”, or “square”. For our snowflake I’ve chosen to use a round end cap to each line.

The updated draw method, shown below, sets the properties for the fill and stroke, and draws a rectangle the size of the canvas using the dark blue fill color.

If you update the draw function with the code shown above and save the file, when you view the result in a browser you should see something similar to this: 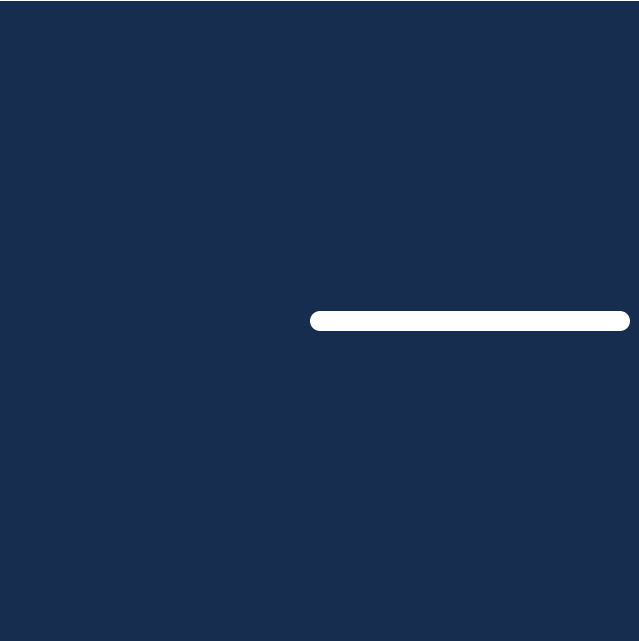 That’s better, but it’s still not much, is it?

Recall that previously we had said that a snowflake has six arms that are distributed evenly, and that the angle between each arm is 60°, or π/3 radians. Therefore, our next step will be to draw another line, starting from the origin, and forming an angle of 60° with our first line. Thankfully, the context object provides us with another method, rotate, that makes our lives easier when it comes to this. Just as we had redefined the origin by using the translate method to move the context, we can employ the rotate method to turn the entire context a specified angle in radians relative to its existing position, as shown below: 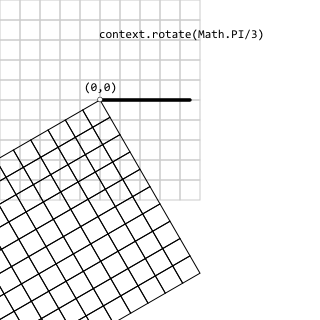 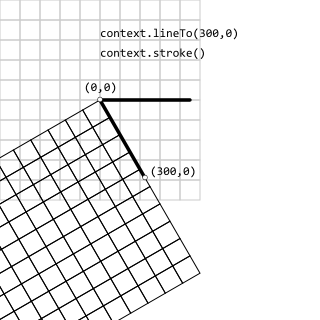 Update the draw function and save the file. When you view the result in the browser you should see the second arm of our snowflake: 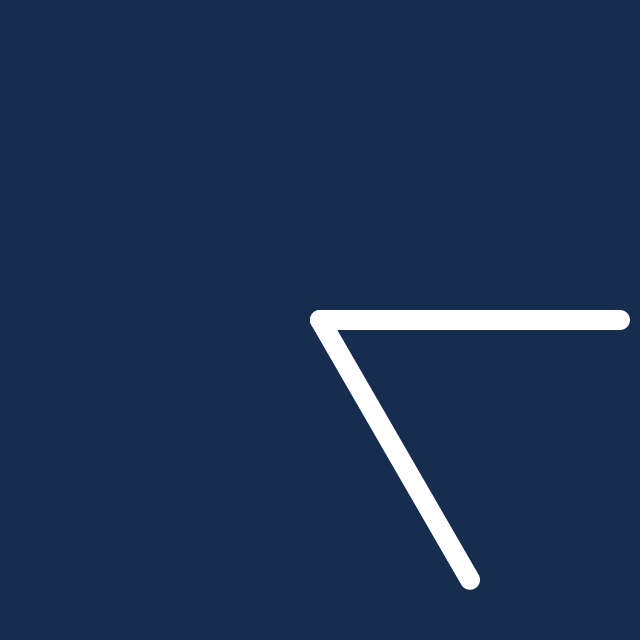 To draw the next arm, we perform the same steps once again. First we rotate the context: 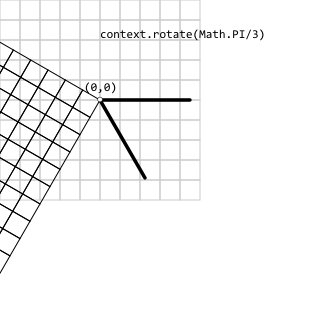 Then we draw a line: 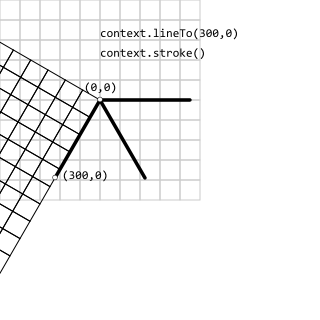 Are you noticing a pattern? This is getting awfully repetitive, isn’t it? To save ourselves the trouble of typing the same thing over and over again, we can use a for loop instead. The for loop requires that we provide three statements: a statement that gets executed prior to the start of the loop, a condition which must be met to continue the loop, and a statement that gets executed after each pass through the loop. In our case, we want to execute the code that draws the line and rotates the context six times. We’ll use a variable to keep track of how many times to execute the block of code, let’s call it count. We’ll set it to zero initially, check to see that it is less than six in order to continue our loop, and add one to it after each pass. We’ll put the code that we want to execute repeatedly within the loop block.

The new version of our draw function that uses a for loop now looks like this:

If you change your draw function and view the result in a browser you should now see all six arms of our snowflake: 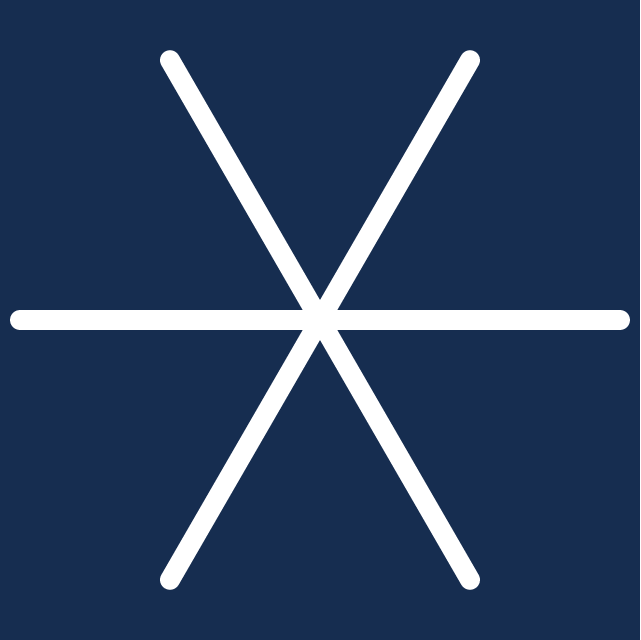 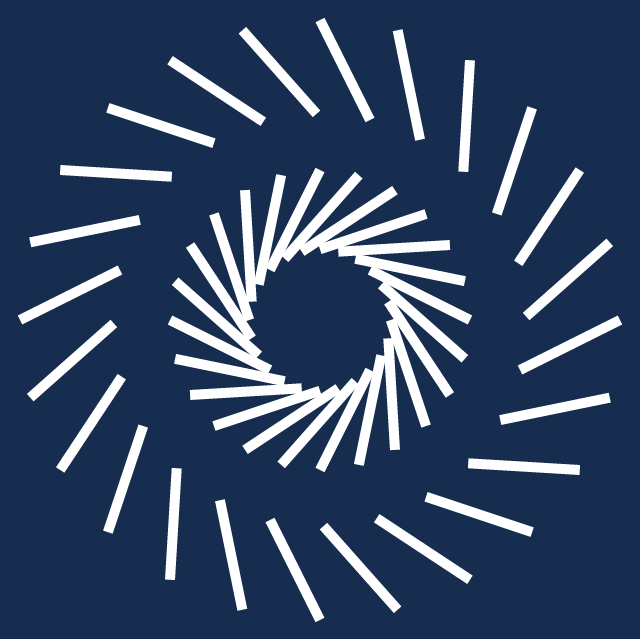 What we have now is nice, but it doesn’t really look like the snowflake at the start of this article, does it? It’s missing something…

We’re going to use the translate and rotate methods that we had used earlier to add branches to the arms of our snowflake. First we’ll draw a segment of our line and then we’ll translate the context so that the origin is the endpoint of the line. Next we’ll rotate the context and draw one branch, then we’ll rotate in the opposite direction and draw the second branch.

To make this code somewhat easier to read, we’ll break up these tasks by writing two new functions, drawSegment and drawBranch. We’ll call drawSegment three times to draw each of the segments of our snowflake arm. In turn, the drawSegment function will call the drawBranch function twice, once for each direction that we are drawing the branch.

Here’s the final version of the draw function as well as the two new functions drawSegment and drawBranch:

If you enter the code and save the updated file, when you view the HTML document in your browser you should see the completed snowflake:

Thanks for following along, I hope you were able to get your program to draw a snowflake, and that you tried to experiment with the code to see how it affects the drawing. Good luck and keep experimenting!

The complete source code for this project is maintained at:

Carl Edward Sagan was born on this day in 1934. His 13 part television series Cosmos aired in the autumn of 1980 when I was still in middle school. Like many...