On Saturday, June 8th we visited Worcester Polytechnic Institute (WPI) in Worcester, Massachusetts for the Touch Tomorrow festival. This was a free all day science, technology and robotics festival. Thankfully the weather was beautiful making it a wonderful day to visit the campus and take in all the exhibits.

We arrived at the WPI campus around 11:00, and after parking in the parking garage off Salisbury Street, we made our way to the main campus. As we left the parking garage there were some folks from WPI who greeted us, gave the kids Mission Cards with a schedule of events, and provided us with bracelets that showed we were visiting for the Touch Tomorrow festival. They also let us know that we could download the Guidebook smart phone app which had the event schedule, campus map and other festival information. 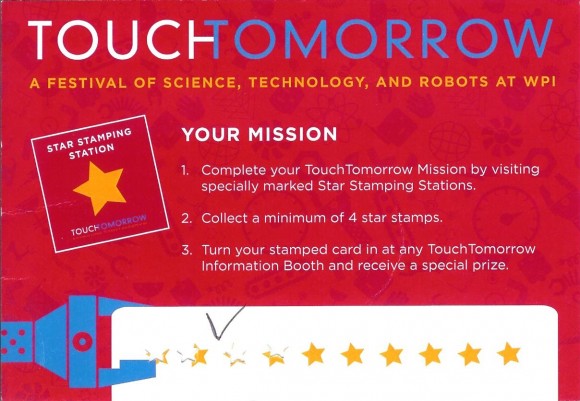 After climbing the steps from the parking garage area up to the main campus (whew!) our first stop was, you guessed it, the rest rooms at the Sports and Recreation Center building, which just happened to be adjacent to the stairway leading from the parking garage. Inside the main hall was set up with a number of exhibits related to robotics, space exploration and science, but our tummies were grumbling (especially mine) so we opted to look for someplace to get something to eat first.

On the way to look for a place to eat we met up with my wife’s cousin, his wife and their three children. We then found our way over to the Campus Center where there is a wonderful cafeteria on the lower level. After filling up we headed off to visit the festival exhibits.

On the main floor of the Campus Center there were also some exhibits set up. At one there was a gentleman discussing the prospects for colonization of Mars. He asked my son if he would be interested in going to Mars to live. However, it would be a one-way trip, he cautioned, since the expense of a return trip would make it impractical. What did he think, would he like to go? My son looked a bit scared at the prospect, probably a sensible attitude :)

What would living on Mars be like? I suspect that some people would be enthusiastic about the prospect of living on Mars. Would it be ethical to try to raise a family there, however? As an adult traveling to Mars one would still hold in memory what life on Earth was like, and so that might make life bearable, but what about a child who only knows the confines of an underground bunker designed to shield them from the harsh environment of Mars? Their only knowledge of Earth would be through pictures and video. Would that be enough to satisfy them, or would their curiosity demand that they travel to Earth? What if they couldn’t return? Sounds like the short story “The Million-Year Picnic” by Ray Bradbury, except that the real Mars is not quite as bucolic as the Mars of Bradbury’s fiction.

Just outside the Campus Center a table was set up with the M&M Math activity which the kids participated in. Here is where we also met up with another of Thao’s cousins, his wife and their two children. Altogether our gaggle of kids now included five girls and two boys. At the M&M Math activity table each child was given a worksheet and a bag of M&Ms. They were then supposed to open the bag and use the M&Ms to answer basic arithmetic questions. One of the questions, at the end of the worksheet, instructed them to “Put two M&Ms in your mouth”, and then asked “How many are left over?” If only all math was taught this way! 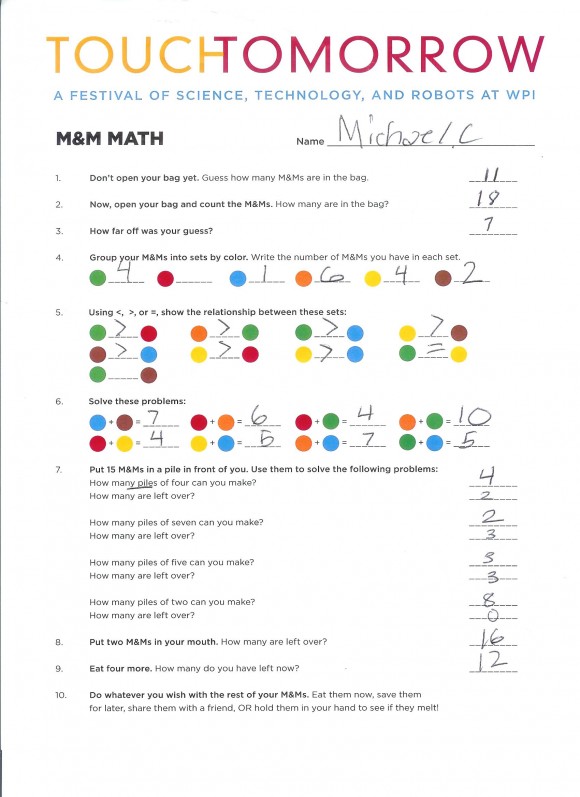 Next we visited the Fuller Laboratories building where there was an exhibit showcasing projects by students enrolled in the Interactive Media and Game Development (IMGD) program at WPI. My son was especially interested in this since he wants to pursue game development as a career.

The computer lab was set up with a number of different games that the students had created. My daughter especially liked one game that let you make a pizza, while my son was engrossed by another game where you played the part of a fish trying to escape from a sushi chef. We also had a chance to try a game that was similar to Portal that enabled you to explore a virtual world. 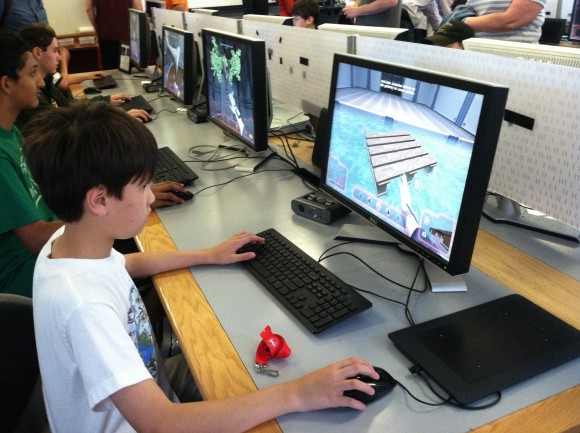 After leaving the Fuller Lab building, we stopped next door at the Atwater Kent Lab where a student robotics exhibit had been set up. There the kids were able to navigate a small robot using an iPad. Another robot was set up to mimic the motion of participants and in an adjoining room, a table was set up with various remote controlled robots that the kids could drive. Downstairs two large research robots, Archie and Baxter, were on display.

Scale of the Universe Presentation 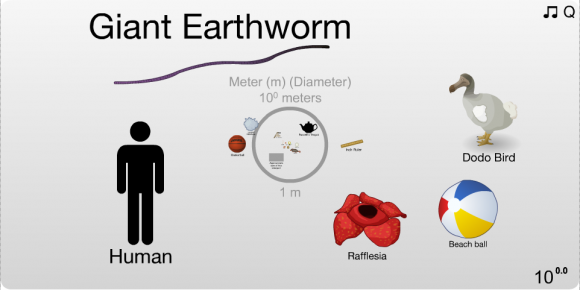 At Olin Hall, on the way back from the Atwater Kent Lab, we sat in on a presentation about the scale of the universe. A professor from WPI led a tour of the universe from the the everyday scale of people and houses to the very large scale of planets, stars, and galaxies. He then reversed course and explored the very tiny world of bacteria, viruses, atoms, electrons, quarks, finally stopping at the quantum foam. The presentation was assisted by the wonderful web based interactive animation The Scale of the Universe 2 developed by Cary and Michael Huang that is reminiscent of the Powers of 10 film by Charles and Ray Eames. Our favorite new words from the presentation are yottameter (1024 meters), yoctometer (10-24 meters), and the Eridanus Supervoid :)

We made our way back to the Sports and Recreation Center which was being used as the main exhibition area. Inside there were many tables set up by all sorts of organizations, from the Worcester Historical Museum, VEX Robotics, iRobot Corporation and the Discovery Museums, among others. The Worcester Historical Museum had an exhibit with information about Worcester’s links to the space program, especially Robert H. Goddard, builder of the first liquid fueled rocket and a graduate of WPI. There was also a table where you could find out more about summer programs for kids at WPI, including game programming and robotics. The kids were also able to get their photos as astronauts: 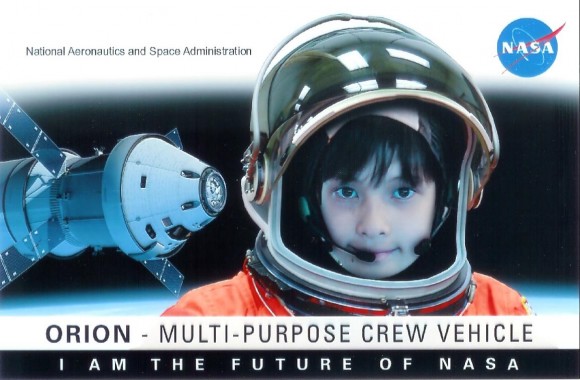 Our final stop was the Quad where there was a performance of a robot band being held. On the Quad there was also a wooden mock-up of the NASA Mars Curiosity Rover, as well as a functioning exploration rover. The kids were even invited to lay down side-by-side while the rover was navigated over them via remote control! After the close of the festival at 4:00 we hung around on the quad while the kids had fun playing tag. We then stopped for dinner at Ruby Tuesday where the kids were able to sit all together at a really long table before heading off on the long ride back home.

Throughout the day, I was regularly referring to the Guidebook app on my iPhone where I could look up event listings for the festival and view a campus map of WPI. I think providing the festival information using the iPhone app was a nice idea and went well with the overall technology theme of the event. In using the app, however, I found it a bit difficult to navigate using the provided map. The map was essentially the same PDF document that is available from the main WPI website, so it wasn’t ideal for viewing on the small screen of an iPhone. In addition, I had to switch back and forth between the event listings and the map in order to figure out where to go and how to get there.

Even though I like the app, I think there may be some room for improvement that would make using this app even more useful. In particular:

I suspect that the GPS enabled instructions and tailoring the map for display on a smart phone are not trivial enhancements. This would definitely be an interesting project, though, and would make the app a lot more useful than a printed brochure.

We all had a great time at the Touch Tomorrow festival. It was my first time visiting WPI and I thought that the campus was really beautiful. There were plenty of fun and interesting activities to keep everyone busy the entire day, and best of all, it was free! We’re looking forward to attending the festival next year.

Carl Edward Sagan was born on this day in 1934. His 13 part television series Cosmos aired in the autumn of 1980 when I was still in middle school. Like many...