I took my wife and children (ages 5 and 9) to Boston on Saturday May 19 for Scratch Day at the MIT Media Lab. We all had a great time there and are looking forward to next year’s event.

Scratch is a visual programming language that enables you to construct programs by dragging and dropping code blocks. For example, using Scratch if I wanted to play the “meow” sound 10 times, I’d drag a repeat block onto the script area and then drag a play sound block into the repeat block, like so:

By linking these blocks together you can create quite sophisticated programs.

What’s So Great about Scratch?

Scratch gives kids, and adults too, tools to create games, interactive stories, art projects, you name it, without getting bogged down with too many details. And it gives you just enough to make something useful right away. My son got the hang of it quite quickly and was able to create a rudimentary game on his own. The other great thing about Scratch is the community and code sharing. After you create a Scratch project, it’s very easy to upload to the Scratch website where it can be shared with everyone else in the Scratch community. Other people can play the game you created, and if they’re interested in how you created it they can download the code to their machine, open it up and experiment with it. That’s exactly how my son was able to advance his learning as he built his games. He found games that he liked, downloaded the code and then tried to incorporate what he learned from the code into his own games. The best part is that he was able to do this all on his own. :) 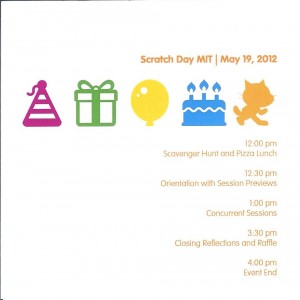 When we arrived for Scratch Day we checked in and were given a Scratch Day program of events and a scavenger hunt card. The scavenger hunt card was a clever way to get people to meet, rather than sticking their noses in their laptops. In order to complete your scavenger hunt card you need to ask someone a question and have them sign your card. The questions were listed on the card and were all related to Scratch, so that made it relatively painless. When the cards were completed you could hand them in for a raffle drawing to be held at the end of the event. 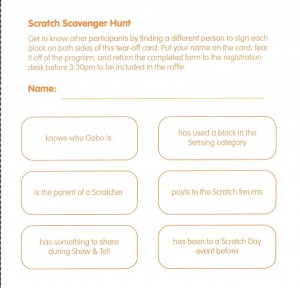 Now, for $10.00 admission this can’t be beat: When we arrived they had pizza lunch for everybody! Believe me, running around trying to find a place to eat once we had driven three hours to get to Boston would have been a headache, so I’m really glad they had planned for lunch for everyone. After lunch we went to the orientation session where they described the various activities that would be going on during the afternoon. My son had signed up for a Show and Tell session to describe a game he had been working on, so that was one of the first events we attended.

The Show and Tell sessions were a way to get a chance to hear about others experiences with Scratch as well as to show off work that you were doing. Among the projects that were presented that I found interesting was a game called Natural Selection where you played a bug who needed to get food, but you also needed to blend into the background if you didn’t want to get eaten. Those bugs that could survive would pass their genes on to the next generation.

We also were able to work on some projects with WeDo, the programmable Lego bricks that work with Scratch, and the PicoBoard sensors that enable you to create programs that interact with the world. The PicoBoard included a light sensor, sound sensor, a push button and a slider. My son and I worked on some simple Scratch programs that changed the background color based upon how loud sounds were, or how bright light was. Another father and son worked quite some time on a project using the WeDo Lego robotics kit to make a working elevator which they demonstrated during the reflection session at the end of the day.

One of the benefits of Scratch Day was to get a glimpse of changes coming in the next version of Scratch. This version will provide a web-based editor, however a downloadable version that can be used offline will also reportedly be available as well. Some of the features that will be available in this version include:

These new features will open up a lot of new possibilities for programming.

We’re already looking forward to next year’s Scratch Day event. My son has been busy writing more games, and my daughter may even have a game of her own by then that she can demo during the Show and Tell sessions!